Review of the Lenovo Legion 5 Pro: You can’t beat the price. 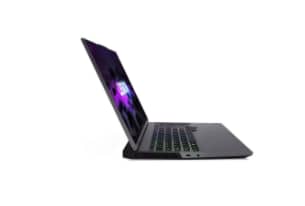 High-end gaming machines built by suit-and-tie PC companies have a counter-revolutionary feel to them. The concept of Lenovo, the company behind the ThinkPad, creating a gaming computer worthy of mention seems strange, yet the Legion 5 Pro is just that. The one I’m evaluating costs $1,530 and has AMD’s Ryzen 7 5800H processor and NVIDIA’s GeForce RTX 3070 graphics. Powerful and cost-effective? That’s practically revolutionary.

16GB of RAM and a 512GB SSD round out the spec sheet, and both components are, thankfully, upgradeable. Before you grab for an external HDD, that pathetic disc will hardly hold more than a couple of Calls of Duty games. But these are the kinds of clever tradeoffs Lenovo has made to keep the price low, allowing you to upgrade the RAM and storage later if you’re feeling flush.

Then there’s the display, which is a 16-inch, 165Hz QHD, X-Rite Pantone-validated IPS panel with the new 16:10 aspect ratio. In comparison to many of its competitors, the panel can hold its own in bright light at 500 nits, and the matte screen decreases the possibility of glare. It’s a lot of fun to watch a 4K video on this thing, and I’ve had a lot of fun working from it during the week I’ve had it. It certainly makes you want to stare at gigapixel photographs of, say, Paris for hours at a time, something I didn’t do much of this week (cough).

Lenovo wasn’t trying to uproot any trees with this design, which is essentially a refinement of the previous one. It’s not as small or light as its competitors, but it looks better in a dark environment with only the glow of an RGB keyboard and the unusual Nanoleaf display for illumination. It’s fine if you’re buying it as a desktop replacement that will spend 90% of its time on the same desk. Oh, and the aluminum chassis is really sturdy, providing you peace of mind when you need to transport it. While the matte grey paint job is very business-like, it conceals a slew of palm sweat-based sins while also attracting every piece of dust in a three-mile radius.

Because of the Legion 5 Pro’s large chassis, there’s plenty of I/O to go around. In addition to the proprietary power jack, there are four USB-A (3.2 Gen 1) ports, two USB-C (3.2 Gen 2) ports, HDMI, Ethernet, and a 3.5mm headphone/microphone jack. There’s also a hardware camera mute button on the right side, which replaces the specialized hardware shutter from prior generations.

Using Lenovo’s TrueStrike keyboard is still a nice but strange experience after several days of use. The keys are 1.5mm deep, although Lenovo uses “soft landing” switches to make each actuation feel somewhat deeper. You expect the hard jerk of a mechanical keyboard every time you press a key, only to discover a pillowy finish and bounce back up. It’s like filling your shoes with water and then stepping into them on a hot day; it’s incredibly convenient, but your brain is alerting you that something is wrong.

Lenovo took advantage of the Legion 5’s larger deck area to include a numerical keypad, which is worth noting. The firm claims that the Numpad is full size, however, it feels a touch cramped to my eyes and fingers when compared to a typical external PC keyboard. The RGB backlighting is muted, however, it may be changed to four separate illumination zones when needed. Meanwhile, the trackpad is absolutely functional, but the larger size is welcome given how little prior generations were.

I don’t have much to say about the machine’s 720p camera, which is the exact definition of serviceable. The light blooms, everything is uncomfortably fuzzy, and the overall look is reminiscent of most 1960s TV episodes when close-ups were shot with a Vaseline-smeared lens. If you want to make living streaming or if you’re a professional Zoom-call-haver, please invest in an external device. Apart from the poor webcam, Lenovo deserves credit for including a separate camera disconnect button in the space-constrained lid, as there was no room for the usual shutter.