Hey bloom, Can you suggest to me a tablet for under $200? Yup! Check out Realme Pad Mini. If you are from India then it’s going to launch on the 29th of April at 12;30 PM, You can buy it from Realme ‘s official site but wait, dear, first listen to the full review here of Realme Pad Mini’s specifications, pros and cons, worth it or not, does it come with a pen, overpriced or budget-friendly.

Answer me. Where can you find an ocean without water? I will answer in the mid of the conversation, so listen to me by heart. Is Realme Pad Mini a mini or beast when looking at last year’s Realme Pad and its competitors in the market. Let’s find out what’s best for you that also fits your pocket.

When looking at the design, the Realme Pad Mini is one step away in giving you a premium feel as built with an aluminum unibody design making it super slim and eye-catching in hand. The body frame goes flat on the part of the border making it alone a standing pad. 8.7-inches of the screen with thin bezels but thicker at the top and bottom parts. You can play videos up to 1340*800 resolution or 179ppi on the Realme Pad Mini LCD screen. When it comes to the protection of your screen, the mini pad doesn’t come with a pre-installed screen protector.

When talking about playing movies, games, or other stuff in it then due to the low resolution of display you may see its pixels but only when trying. Features like Eye Comfort and Dark mode are just made for the user’s needs but in sunlight or in heavy bright it does not work well, yet marvelous. Also viewing angles of the display is not as much as good they as seen blurred and not clear.

Feels like a soft bump on the right side of the pad as the volume and power buttons are built there. The left side of the pad has a hybrid tray for two nano-sized SIM cards and 2nd one for 1TB of SD Card. For your so-called songs, Realme gave a 3.5mm headphone jack and two loud stereo speakers when getting tired from leads. Well, you can also use Realme buds for a next-level audio experience.

The calling in Mini gives you the best experience in this budget segment as a microphone is installed at the bottom down of the pad. When it comes to powering your mini pad then 18watt fast charging with its C-Type cable, is best for you, and also charges your friend’s stuff with its reverse charging feature.

Shoot your photos with its rear 8MP camera that gives you HDR, Panoramic view, Expert, Portrait Mode, Burst, Filter, Broken Effect Control, Beauty Mode, and Face-Recognition. These features are adding stars to your photos while shooting them. Again cameras are quite enough to shoot for social media stuff but when compared to mid-range phones, it loses. The 8MP rear camera and a 5MP front-facing camera click fine for a daily user.

Thinking of software, it comes with Realme UI based on Android 11 with default Google apps. So, the entertainment house is ready for you to attack. With it, you can store data in it as it comes in variants of 3/32GB and 4/64GB. Now choose which suits best for you. You can also increase storage up to 1TB by using a microSD card.

You can use 4G LTE, WiFi, Bluetooth 5.0, and GPS to make connectivity around you stronger. It doesn’t come with any fingerprint scanner, As to lock and unlock you can enable PIN, Pattern, or Face unlock. When it comes to powering your pad, A 6,400mAh battery with an 18watt fast charging capacity delivers you around 8+ hours of backup after web browsing, using social media, and playing videos online.

When it comes to portability, It’s like carrying two watches at the same time. Just meant as named mini, sized 7.6mm is ready to hold in your one hand. The rotating screen while watching or reading something felt comfortable to the hands. Teachers, Students, office workers, get ready to put it in your bag to join or create an online meeting, and mentoring students just got easier.

Realme pad Mini is going to launch on the 29th of April at 12:30 PM in India. Indian consumers can buy it from e-commerce sites like Flipkart and Amazon. You can also buy Realme Pad Mini from Realme’s official site. 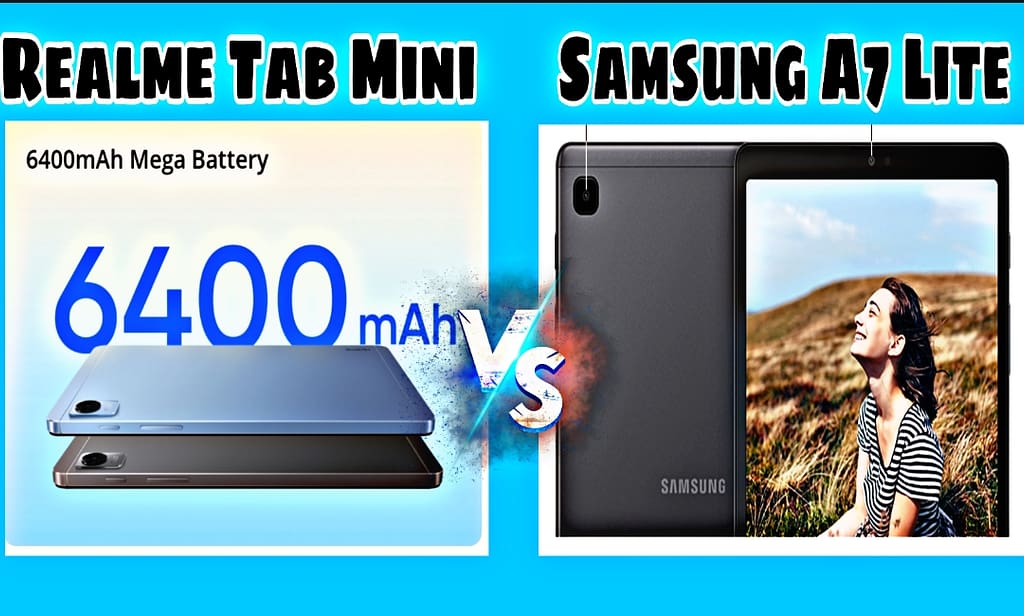 When it comes to who’s better and why, Here Realme Pad Mini takes over Samsung A7 Lite in segments like slim body, long-lasting battery, and better display. Let’s check out why I am saying this.

Clearly, Samsung A7 Lite is only 8mm think whereas Realme Pad Mini is at least 7.6mm that makes it easy to handle, has a better grip, has good stability on our hands, and catches the eye easily. Even with a bigger battery Realme Pad Mini is sleek in design and is ignored by the Samsung A7 lite.

A7 Lite comes with a 5,100mAh battery whereas Pad Mini comes with 6400mAh battery power that almost gives you 1 day of backup on browsing, calls, and watching videos. A 25% increase in power in Pad Mini makes it a hub of power, giving you the confidence to do more. When it comes to charging then again hats off to pad mini as you are about to charge with an 18watt fast C-Type wired charger whereas A7 Lite can be charged with just 15watt via wired.

Although both have the best displays in their price segments here again Pad mini takes over. Even with equal, 8.7 Inches display Pad Mini comes with more user needs technology. It has a sunlight mode feature that makes the display clear to view even in sunlight, not in Tab A7 Lite. It is to be noted Pad Mini has an IPS LCD whereas Samsung Galaxy A7 Lite comes with a TFT display.

As you know ISP displays are better than TFT displays in terms of color saturation, wider view, and better viewing angles. The important point to consider is both are available to buy at similar prices ~($200). 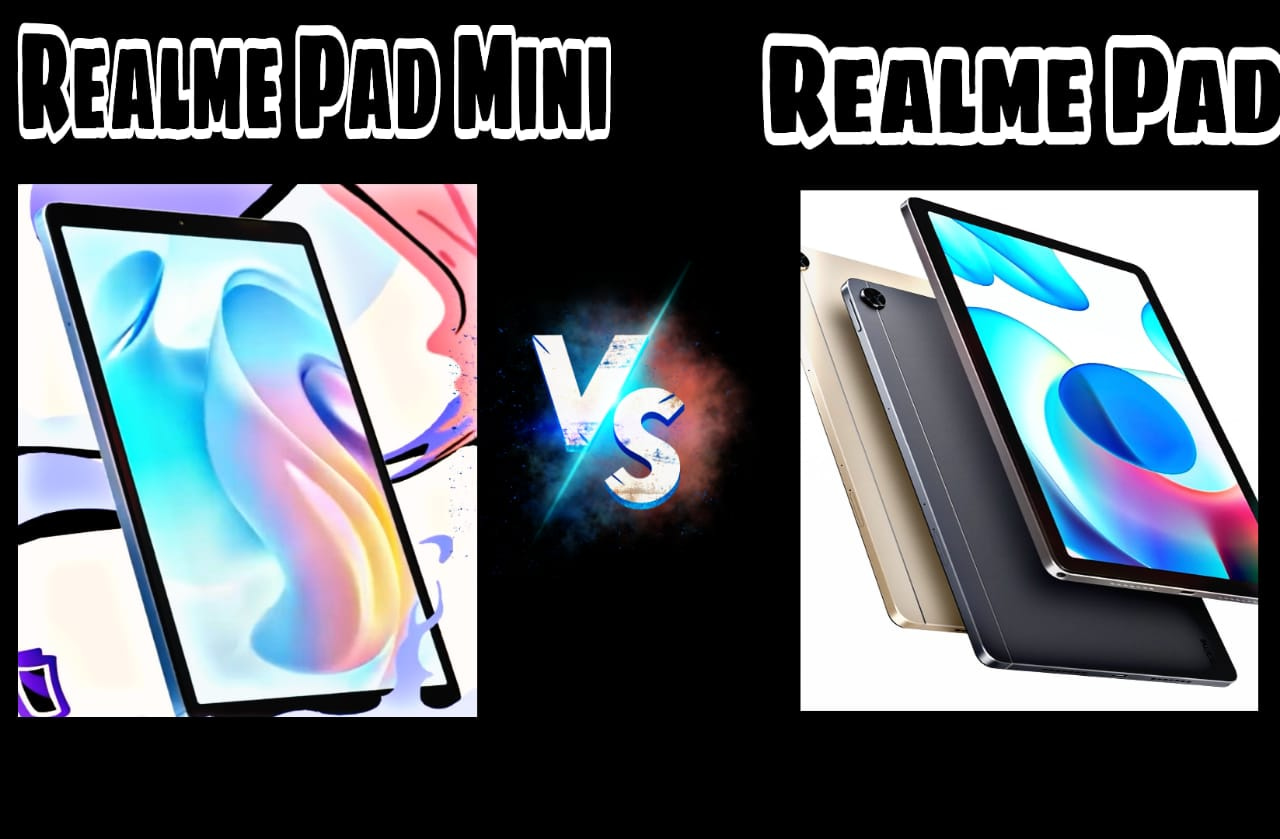 In simple words, if you are looking for comfort, ease to carry, and move on then just go for Realme Pad Mini. The difference factor between these two tabs is displays, cameras, and batteries. Display got 10.4-inches in Realme Pad and Pad Mini has 8.7- inches.

You can shoot videos at 1080P at 30fps from the 8MP front camera of the Realme Pad but the Pad mini has only 5MP. Xiaomi Pad 5 has an advantage of battery as it comes with an 8720mAh battery whereas Realme Pad Mini has 6400mAh. 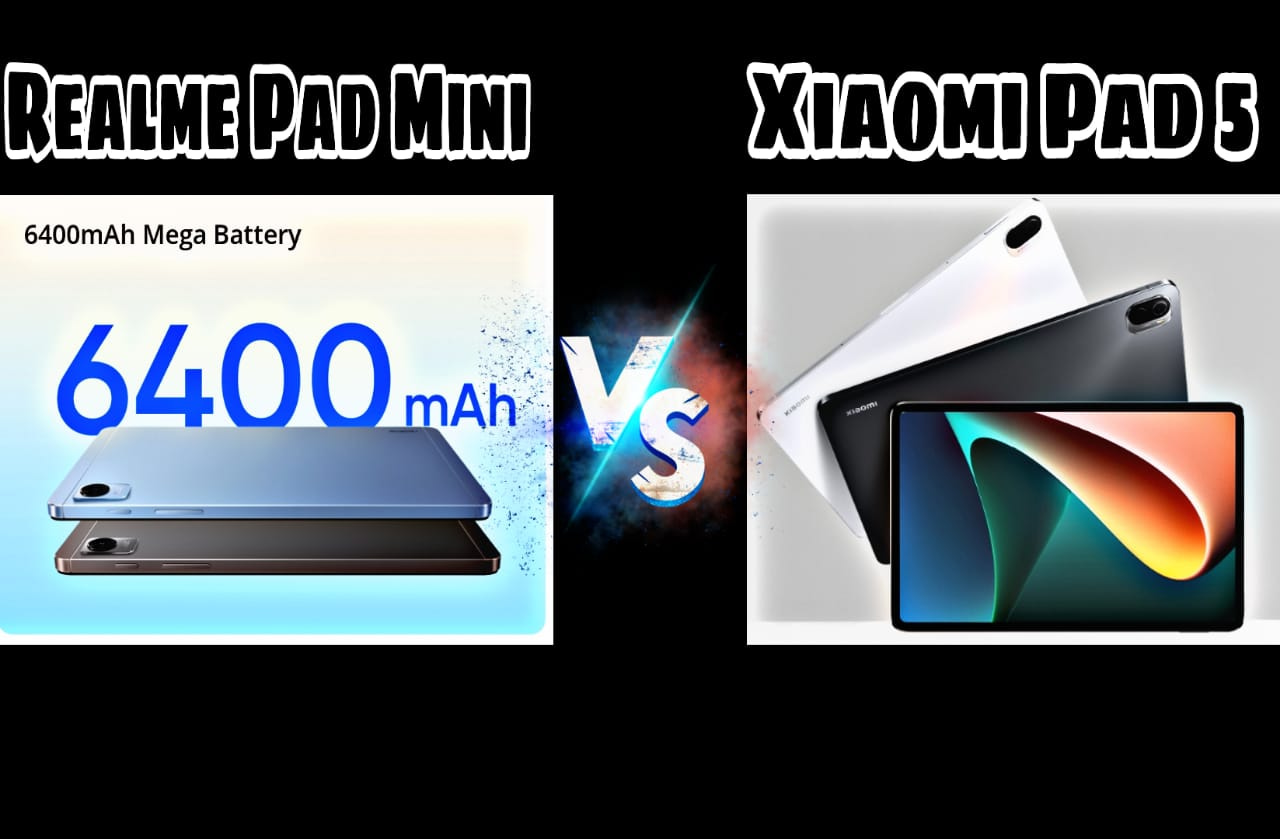 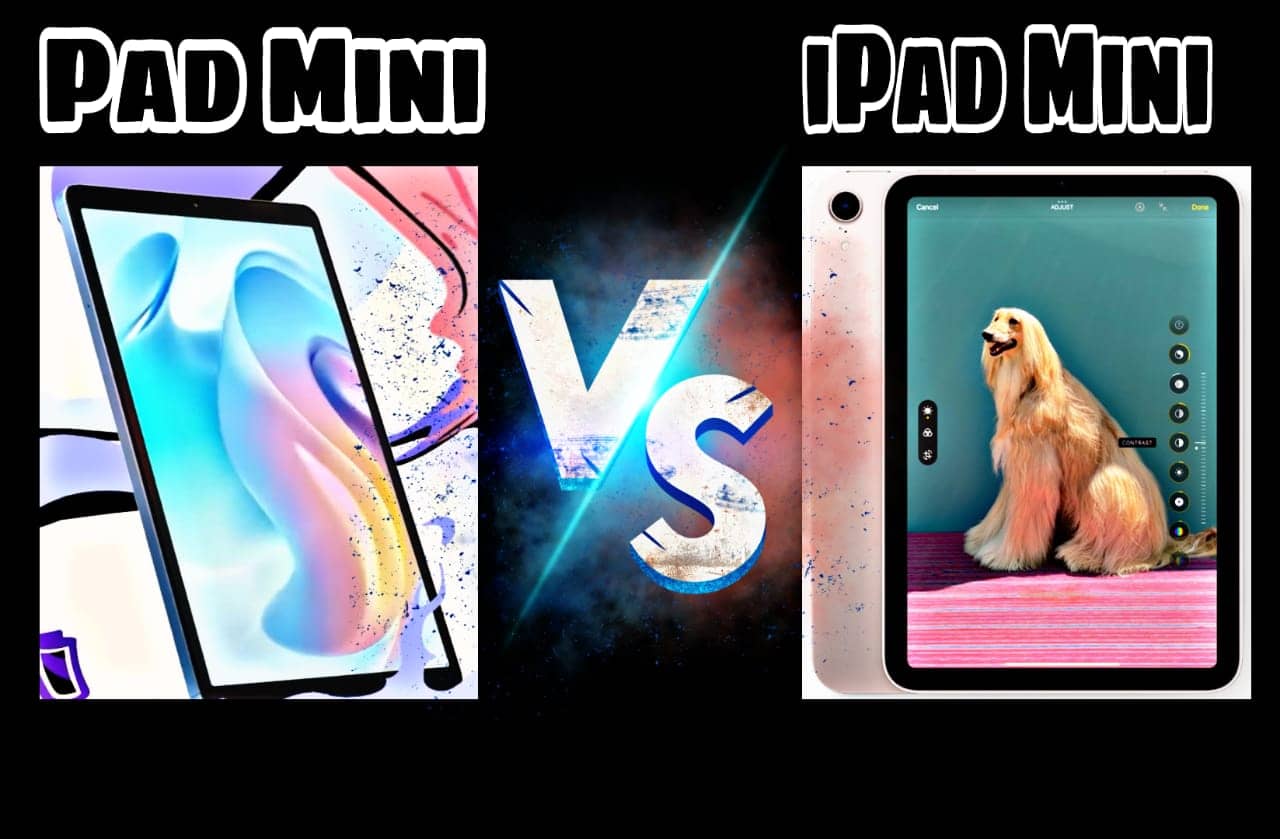 Looking at the display of the iPad mini, liquid Retina IPS LCD at 500 nits gives you an ultra-clear view of the screen, if we talk about Realme Pad Mini, IPS LCD with 179 PPI installed here. iPad Mini display here wins. For a faster and smoother experience, iPad Mini top variant comes with 4/256GB whereas Realme Pad Mini comes with 4/64GB. One thing about iPad screens is scratch-resistant. iPad Mini runs on OS 15 and Pad Mini runs on Android 11.

iPad Mini has an A15 Bionic Chip (5 nm) for faster and smoother UI whereas Pad Mini has Unisoc Tiger T616 (12 nm). You can shoot videos at 4K up to 60fps and HD videos up to 240fps via the rear camera from Apple iPad Mini whereas you are only able to shoot videos at 1080P at 30fps via the rear camera from Realme Pad Mini. When going to look at the battery of both tabs the Apple iPad Mini has Li-ion (19.3 Wh) battery whereas Realme Pad Mini comes with a 6400mAh battery, 18w fast charging, and reverse charging.

What is the weight of the Realme Pad?

Because of easy to afford due to pocket-friendly, best portability, best for online classes and meetings, packed with all entertainment apps, built for gaming, and all features you would like to have in a mid-range phone are already present in Realme Pad Mini.

Now, it’s your turn to help people by sharing this article. Have a good day!