By The Bloom Talks
August 2, 2020
Technology 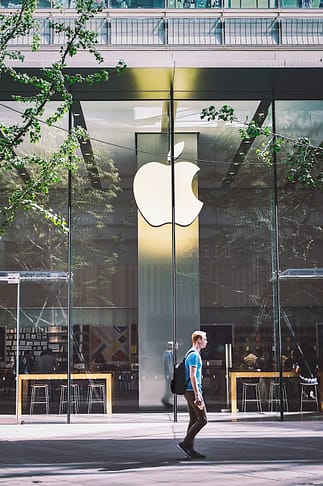 What do you think about which company has the largest market evaluation?

welcome, bloomer’s again here. Today I am going to tell you Apple leads a $1.84 trillion company now. Let’s bloom together more about this:-

Apple becomes the world’s most worthwhile openly company having a market valuation of $1.84 trillion by routing Saudi Arabia’s oil company which has a market valuation of around $1.76 trillion as per reports by CNBC. Apple’s products heavily sold at the end of the march which enhances their sales by 10%. Previous year Apple sales of products hit the revenue by $59.7 billion by making sales on products like Mac and iPads in bulk. Now according to their reports, says that consumers are heavily in demand like iPads, phones, AirPods, etc. instead the people are at their home and living with peace in this Pandemic.
For your kind information big companies like Amazon, Facebook, and Google reported their earnings yesterday, report says they currently have good fraternity. Facebook says we are increasing our daily users by increasing rate of 12 percent every year bygone $1.79 billion.
Apple’s third-quarter earnings released on Thursday boosted its sales and stock by the company’s growth 11% every growth and this year’s shares of Apple increased by 44% despite this pandemic.
This report updated and wrote by Morgan Stanley in a research note on Friday. According to reports in 2010 Apple lead over Microsoft in market capitalization. Apple may about to deal in also a television set next year which will increase its market capitalization and third-quarter earnings, Apple indeed leads more market value than Saudi Aramco. Apple’s share starts at $318 per share. Apple has a total of 46% of the share of the smartphone market in the U.S as the first quarter of 2020 and last year it was 39%  in the first quarter of 2019.
Thanks for visiting thebloomtalks.com.
The Bloom Talkshttps://thebloomtalks.com
Get the latest news & articles on "Technology" and "Health". Listen to the podcast on "Technology, Motivation, Health, Book Readings".